Many people keep candles in their emergency supplies, so I thought I would do a little experiment to see what kind of candle will burn the longest.

I used six different candles in my experiment as follow: 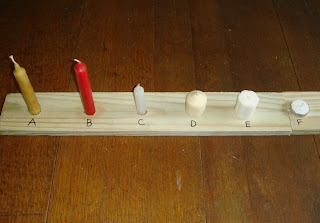 Candle A is a bee’s wax candle.  It is six inches tall, 7/8 inches in diameter, and weighs 46 grams.  I weighed each candle so that I could more accurately compare their burn times.

Candle B is a paraffin decorative taper; the kind of candle that you stick into a candle holder when you have a fancy dinner on the table.  I cut this candle down so that it was also six inches tall.  It has a diameter of 7/8 inch and weighs 40 grams.

Candle C is a paraffin emergency candle.  These candles are sold in supermarkets and variety stores and are specifically labeled as emergency candles.  The candle I used is four inches tall, ¾ inch in diameter, and weighs 20 grams.

Candle E is a paraffin votive candle.  It is 1 ¾ inches tall, two inches in diameter, and weighs 39 grams.

Candle F is a paraffin tea candle.  It is 3/8 inch tall, 1 3/8 inches in diameter, and weighs 10 grams.  The tea candle is contained in its own little aluminum foil tub, presumably to keep the melted paraffin from running off.

So, let’s get started.  All the candles were lighted at the same time. 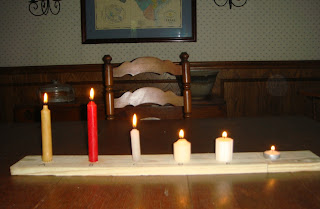 I turned off the lights and closed the drapes to try and get an idea of how much light each candle produced.  I don’t have anything to measure the amount of lumens each candle produces, so I just had to eyeball it.  They all look to be about the same with the exception of the tea candle which is noticeably dimmer, and the emergency candle appears to be just slightly brighter than the others. 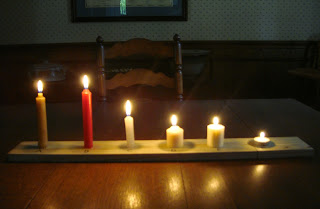 At the end of the first hour the emergency candle has burned down quite a bit. 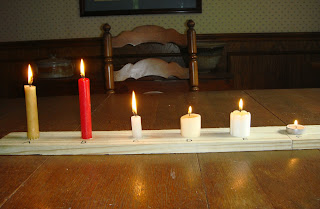 By the end of the second hour the emergency candle is getting very short. 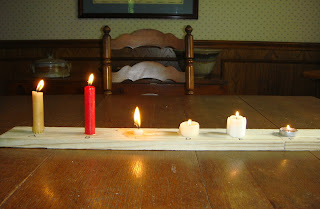 The two votive candles are starting to form large puddles of wax around themselves.  I don’t know for sure, but I think that this is because the votives only get hot enough to burn the wax that is right around the wick area.  The wax that is farther away from the wick doesn’t burn.  It just gets hot enough to melt and run off. 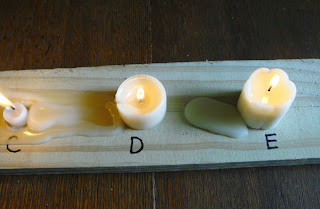 After two hours and thirty-five minutes the emergency candle is the first to go out. 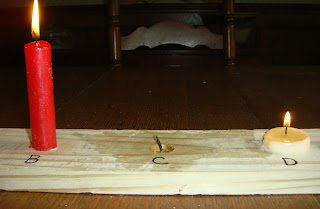 By the end of the third hour the two votive candles are getting very low. 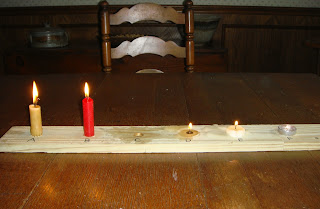 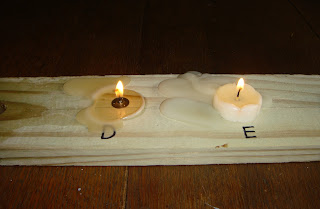 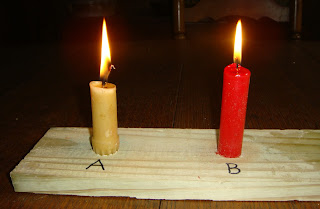 After three hours and twenty-five minutes the tea candle goes out.  It has not burned the longest, but remember, at only 10 grams weight it is the smallest candle in the test. 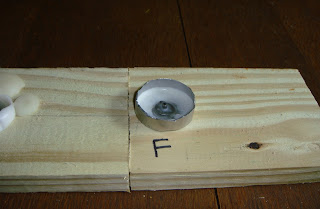 After three hours and twenty-nine minutes the paraffin votive goes out.  You can see that it has left a large pool of melted (unburned) wax.  In fact of the original 39 grams of wax there are 23 grams that remain as unburned waste. 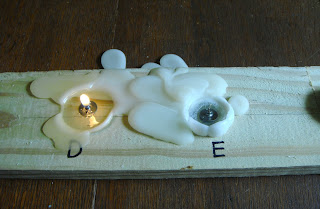 It appears at this point that the paraffin taper will last the longest, 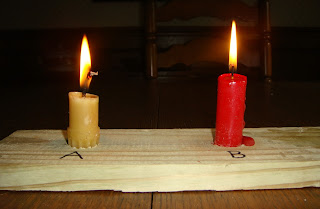 but for some reason it starts melting and pooling wax rather than burning it.  After four hours and fifty-eight minutes the paraffin taper goes out. 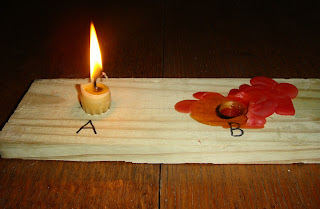 The bee’s wax taper burns for over another hour and finally goes out after six hours and four minutes.

So to summarize the burn time of each candle:

Now it would be easy to say that the bee’s wax tapers burn longer than other candles, but let’s remember that the tested candles were all different sizes and weights.  The only fair way to make an apples-to-apples comparison is to figure out how many minutes per gram of wax that each candle would burn, and here the results are a little surprising.

The run-away champion was the paraffin tea candle which burned an amazing 20.5 minutes per gram.  By the way, I had some other tea candles that were ¾ inch tall instead of 3/8”.  I burned one of them and the results held.  The ¾” tall tea candles burned for nearly 7 hours.

So there you have the great candle experiment.  Even if you have to burn two tea candles to get the same amount of light as from the other candles, you are still ahead of the game.  If you are going to lay in a supply of emergency candles I would say that tea candles look like a winner, and did I mention that they are also cheaper than any of the other candles.  Definitely a winner.

Posted by Sensible Survival at 5:48 PM No comments: