Let me start off by saying that there are a lot of different recipes for biscuits, and several different methods of cooking them in a Dutch oven.  I don’t claim to have the ultimate biscuit cooking knowledge.  This recipe for biscuits is what I would call a survivalist recipe.  It uses only basic ingredients that can be stored for a good while; no butter, or milk, or buttermilk, etc.  You can change the recipe to make a tastier biscuit; but, truth is, these are not too shabby.

The cooking equipment that you’ll need is:

The recipe ingredients are:

Before you mix up your biscuit dough you need to build a good hardwood fire.  You need some good coals to cook on, and it may take from 45 minutes to an hour for your fire to burn down properly. 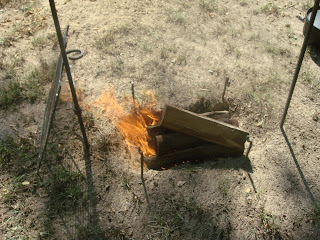 Once your fire is built, set your Dutch oven next to the fire in order to pre-heat it.  Turn the Dutch oven occasionally to heat it evenly. 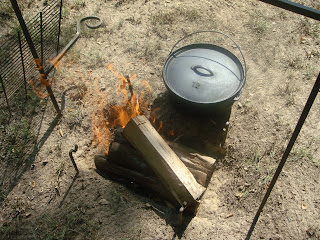 When the fire has burned down pretty good, it is time to mix up your biscuit dough.  This recipe is for a small batch that will feed two or three people.  Start by placing two cups of self-rising flour in your mixing bowl. 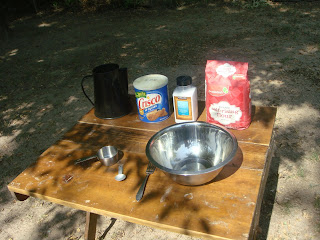 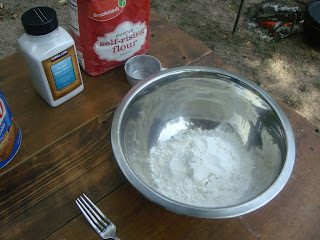 Add one teaspoon of salt and mix it into the flour. 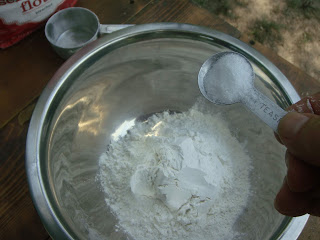 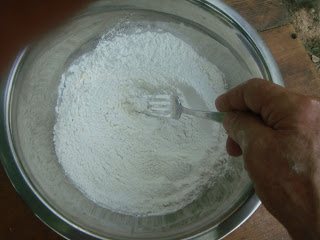 Next add ½ cup of shortening or lard (for a better biscuit use half butter and half shortening). 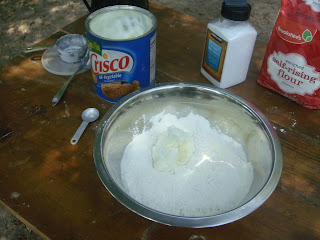 Use your fork to cut the shortening into the flour. 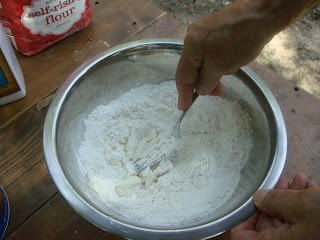 Mash and mix until the shortening is evenly distributed and the flour looks like coarse sand. 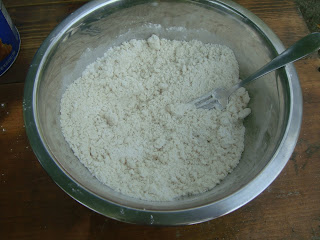 Now you can start adding water (or milk or buttermilk for a tastier biscuit).  Add the water a little at a time, mixing as you go. 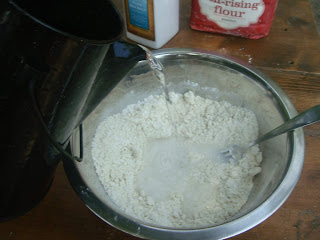 Keep adding water until you have a dough that doesn’t stick to the mixing bowl or your hands. 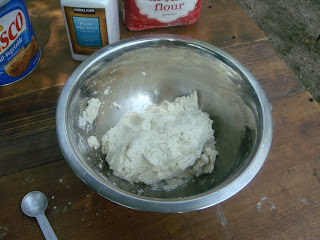 Let the dough rest for a few minutes while you grease your biscuit pan with shortening. 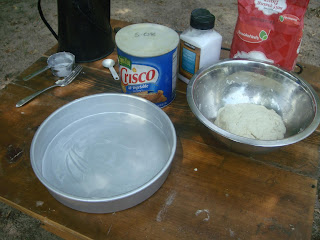 For quick and easy camp biscuits I like to tear off chunks of the dough, press them into a ¾ inch thick disk with my fingers, and place them in the biscuit pan.  If you’re cooking in the kitchen, you can roll the dough out on a floured cutting board and cut the biscuits out with a biscuit cutter.  They don’t taste any different.  They just look prettier. 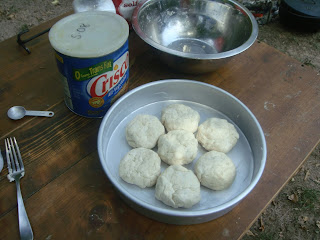 Now turn to your fire and shovel out a bed of coals to set your Dutch oven on. 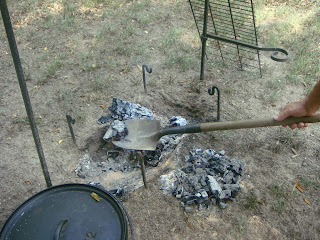 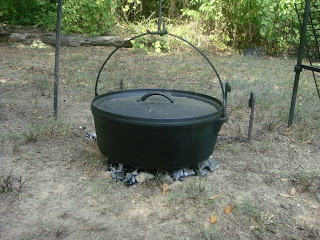 Put your three lug nuts in the bottom of the Dutch oven, 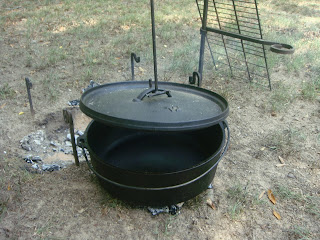 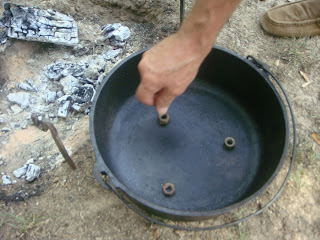 And set your biscuit pan down into the oven.  The lug nuts will hold the pan up off of the bottom of the oven and allow the heat to circulate around the pan better. 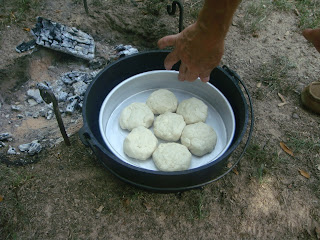 Put the lid on the Dutch oven and shovel an even layer of coals onto the lid. 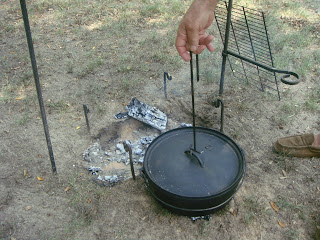 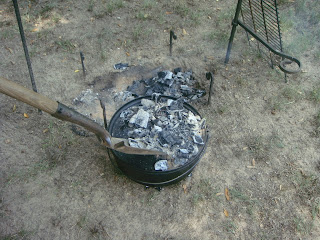 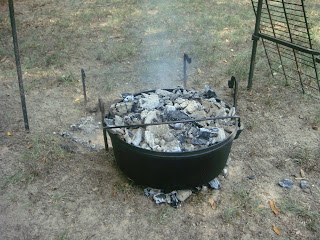 Let the biscuits cook for ten minutes, then use your lifter to rotate the Dutch oven 180 degrees one direction. Then lift the lid and rotate it 180 degrees back the other direction.  This is, again, to try and keep the heat distributed evenly.

Let the biscuits cook for another ten minutes then carefully remove the lid. 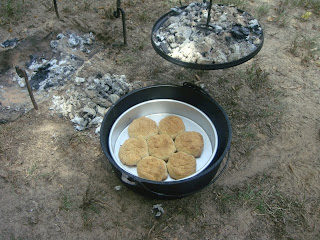 You should now have a nicely cooked pan of hot biscuits waiting for some butter and jelly or maybe a nice ladle full of sausage gravy.

Posted by Sensible Survival at 9:51 AM No comments: