The garden is in full production of jalapeno peppers, so its time to get some canning done.  I pickle my jalapenos so I can do my canning using the water-bath method rather than pressure canning.  To make six pints of pickled jalapenos you will need:

I always start my jars sterilizing first since this takes longer than any other part of the process.  To sterilize jars, fill them with water and place them in the pot, then fill the remainder of the pot with water until the jars have at least ½ inch of water over the tops.  Place the pot on the stove, cover, and turn the burner on high.  After the pot comes to a rolling boil let it boil for ten minutes then turn the heat off.  Keep covered. 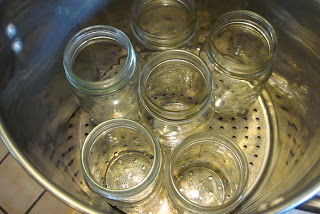 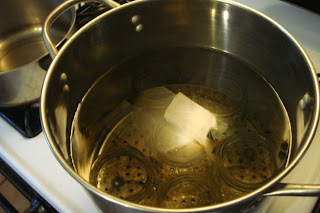 Next I prepare the pickling brine.  To make the brine I use a medium large pot and pour in five cups of distilled white vinegar, five cups of water, and five tablespoons of canning salt.  Be sure to use canning salt, kosher salt, or pure sea salt.  Do not use iodized table salt.  To this mixture I add one teaspoon of mustard seed, one teaspoon of granulated garlic, and ¼ teaspoon of turmeric.  Cover this mixture and bring to a boil for 15 minutes.  This is actually a little more brine than you will need, but there’s nothing more frustrating than to run short of brine and have to make a new batch to finish up that last jar. 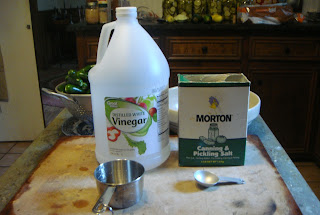 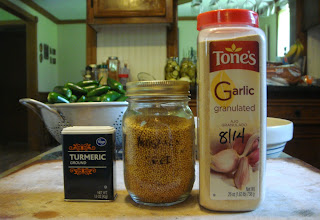 Place your lids and rings in a small pot and cover with water.  Heat until the water just starts to boil then turn the heat off.  I usually don’t turn the heat on under the lids and rings until about ten minutes before I’m going to use them.  It doesn’t take long for them to heat up, and I want them to be hot when I use them. 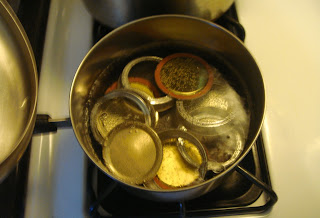 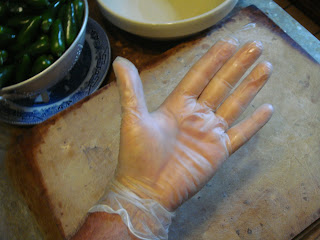 I cut off the stem end of the peppers and then split them in half.  If you don’t want them to be too hot you can remove the seeds and ribs, but it kind of defeats the purpose of jalapenos to do this. 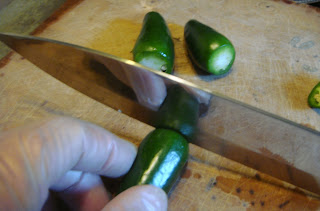 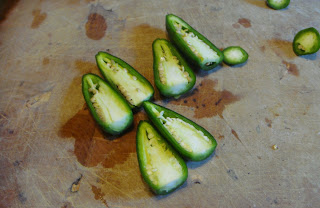 When your jars have sterilized, use your jar lifter to take them out of the pot.  Pour about an inch or two of water from each jar back into the pot then discard the rest.  Recover the pot to retain as much heat as possible.

Line your jars up on the counter and stuff them as tightly as possible with the jalapeno slices.  Add one grape leaf to each jar as you are filling it with jalapenos.  The tannin in the grape leaves will keep the jalapenos from getting too mushy. 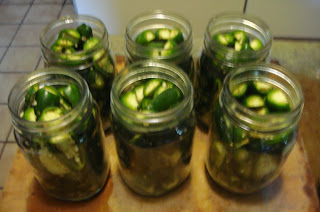 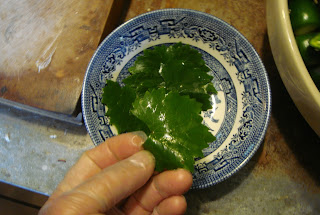 Pour hot brine in each jar until it is about ½ inch from the top rim. 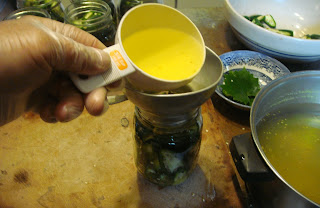 Run your chop stick down the inside edge of the jar all the way to the bottom.  Do this three or four times around the inside of the jar.  This is to remove trapped air bubbles.  Top up the brine so that it is about ½ inch from the rim. 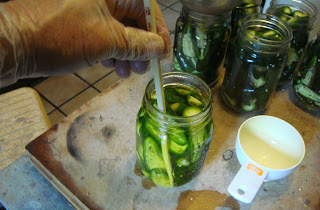 Wipe the jar rims with a damp paper towel to clean them and insure a good seal. 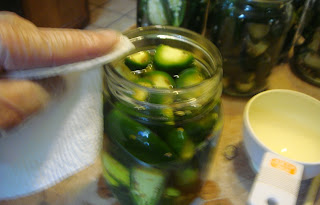 Place a hot lid on each jar lid and as you place the lid on, immediately screw down a ring firmly on each jar. 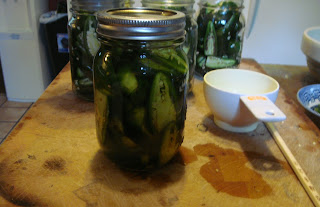 Use your jar lifter to place the jars back in the canning pot.  Make sure that the jars are completely covered with at least one inch of water above the tops. 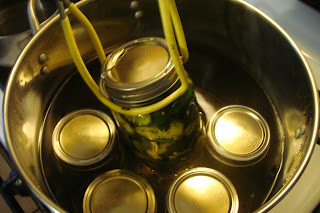 Turn the heat back on and bring the water back to a boil.  Boil your jars for ten minutes then cut the heat and immediately lift the jars and set them out on the counter to cool. 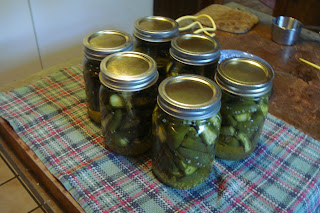 As they cool the lids should make a loud pink as the center of the lid pops down a little.  If the lid doesn’t ping down, you do not have a good seal and the peppers will spoil.  All you can do is either replace the lid and ring and re-boil the jar, or discard the peppers.  You may choose to refrigerate the contents and use them in the near future, but I either re-can or discard.

When the jalapenos have cooled for 24 hours; I remove and wash  the rings for re-use, date the jars, and put them into storage.  Be sure that the lid is still popped down and that the seal is intact when you open a jar for use.  If the lid is not down discard this jar as it may contain botulism.  I have never had this problem, but it can happen, so be safe.

One note:  don’t be dismayed if your peppers float up and leave a little empty space of brine at the bottom.  It is almost impossible to pack the peppers tight enough to keep this from happening.

Posted by Sensible Survival at 1:59 PM No comments:

All Machines Will Eventually Fail


We’ve all read those prepper novels where the protagonists escape to there well equipped retreats that have everything they need to survive.  They have tractors, garden tillers, chain saws, generators, solar panels, windmills, fuel dumps and lubricants, four-wheel drive vehicles, ham radios, propane tanks, etc., etc., and etc.  They are able to live, and thrive, and help out other poor unfortunates that were not prepared, and when society finally gets back on its feet they are able to re-enter it virtually unscathed.

Well, those are nice works of fiction, but here are some facts.  In the last six months on my farm I have had to replace one car battery, one tractor battery, an ignition switch and a diesel cut off solenoid on a tractor, a chainsaw bar, bearings on a belly mower, the supply line and regulator on a propane tank, a burned out well pump and holding tank, and I still need to replace oil seals on a garden tractor, and roto-tiller.  And that’s just the stuff I can remember.

The fact is that all machines eventually break down, and the parts to repair them and the power to run them are all dependent on a very fragile manufacturing and delivery system that will not exist after some cataclysmic event disrupts all of that.  You can certainly stockpile some obvious maintenance parts and you can even buy duplicates of some items like chainsaws; but who can afford to have a back-up tractor or a duplicate vehicle that just sits in the garage?  Maybe you, but certainly not poor old country-boy me.

A little ingenuity and a little scavenging may be able to keep things running for a while; but if a crisis lasts long enough, we will all be living on the frontier in the 18th century.  All farming will be done with hand tools unless you are fortunate enough to have a plow and some mules.   All wood work and wood cutting will be done with hand tools. All cooking will be done on wood.  Your house will be heated by wood and lighted by homemade candles.  Water will be drawn from a well with a bucket.  Soap will be homemade.  Shoes and clothing will be made from home tanned leather.  Think “Daniel Boone” and you will be pretty close to what life would be like if society broke down for ten or fifteen years.

So, what I’m trying to say here is that prepping is a multi-layered situation, and one of those layers is “what if it goes on for years?”  It certainly wouldn’t hurt you to start learning some of the daily living skills that were part of 18th century life.  Learn how to cook on a campfire.  Learn how to brain-tan leather and make moccasins and clothes.  Learn how to make candles.  Maybe even take up blacksmithing as a hobby.  There are re-enactment groups all over the United States that promote and teach these skills, and it may be worth your time to check one of them out.

Hopefully you will never have to actually live in the 18th century, but it can be kind of fun to learn how, and it will add another layer of depth to your preparations for a possible calamity in the future.
Posted by Sensible Survival at 9:46 AM No comments: